Celebrating the beauty of gardens!

Last fall, I began a comprehensive renovation, rejuvenation and overall heavy edit of my front garden. I've been gardening on my 50 x 100 lot in NE Portland since 1998, so some of my initial plantings had run their course.  I removed several large shrubs to make some of the larger framework plants more "comfortable" and to make room for some fresh understory plantings.

But I'm particularly pleased with and excited to show you the hardscape additions I've made. These new hardscape features include a steel and stone retaining wall along the front of my garden and the addition of curvaceous raised beds made of steel flat bar woven in a sinuous, basket weave pattern.

I'd been enjoying working with steel in my client projects for some time, but hadn't yet landed on a way to incorporate some of my ideas into my garden at home. I believe that the combination of the steel with the basalt boulders really make this addition "work" within my existing garden. I've got a fair amount of existing stone and steel in my garden, so the union of these two materials make sense and ensure that the wall and the raised beds in the parking strip feel like a part of the larger whole.

Deciding to pursue these changes was the result of a combination of forces.  Believe it or not, it started with the decision to change the way that I water my garden ... but alas, that’s a topic for another post. All that I’ll say about that part of the decision at this juncture is that I decided that I needed a wall or edge of some sort that would prevent water from immediately running off the slope and onto the sidewalk. And one thing led to another.

Additionally, some of the primary structural plantings in my garden had developed some heft and were ready to do more of the heavy-lifting in terms of holding the overall garden structure together. In particular: two Japanese maples (Acer palmatum), a crape myrtle (Lagerstroemia x indica 'Zuni'), a Magnolia stellata and my dynamic duo of Taxus x media 'Sentinalis' that were planted in the early stages of the garden's development and which are now quite established.

Another important factor was that some very lovely shrubs that I've enjoyed for a number of years had simply outgrown their welcome. The most significant removal was a very large, very beautiful doublefile viburnum (Viburnum plicatum tomentosum 'Mariesii').  It was one of the initial framework shrubs in the first incarnation of my garden, and a dozen years later it commanded the bulk of the southwest corner of my front garden. It was somewhat difficult to decide to remove this shrub, but once it was gone, it was immediately obvious that it was the right thing to do. Its removal allowed the structural plants I mentioned first to really do their thing. 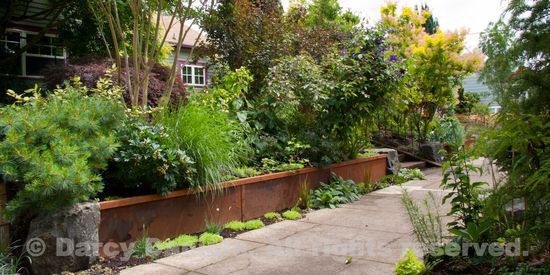 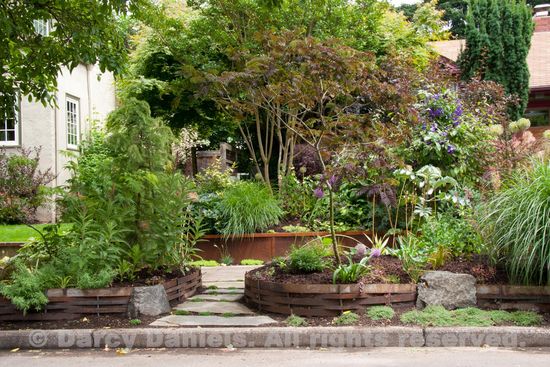 The three photos above were taken very recently and give a pretty good idea of how the newly-installed steel elements fit into the front garden and provide a structural frame to embrace the exuberant plantings. The flowing form of the woven steel presents a satisfying juxtaposition to the sturdy, linear lines of the retaining wall.

As always, I'm certain that I’ll continually tweak and tinker with my planting schemes, which is one of the things that I find most enjoyable about garden-making. With the addition of this steel frame and the editing of my structural plantings, I'll be able to do that and preserve a sense of orderliness in the overall scene. 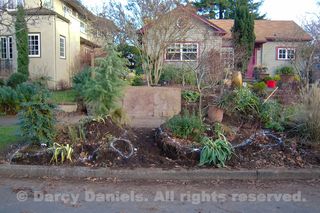 I always like to see process shots, so I've included some of those as well. In the first photo in the sequence just above, the paint lines show how I "roughed-in" the cuts and general shape of the raised edging in my parking strip. While I moved and removed a number of plants, I wanted to work around an Albizia julibrissin 'Summer Chocolate' that was really starting to develop a nice shape. The second photo is taken from the same angle immediately after we completed construction. The third photo gives a closer view from a different angle. The fourth and final photo was taken at the same angle very recently. 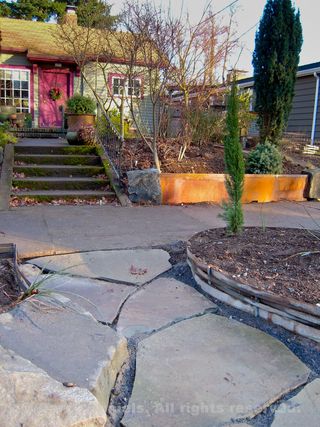 There are two pathways that are cut into the parking strip to improve pedestrian access. The series of three photos above show the primary path leading to the front walkway to our house. 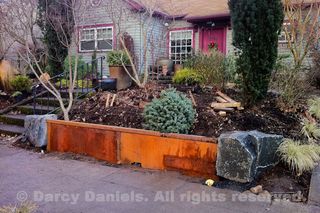 The two photos above show the front retaining wall just after construction was completed.  The second close-up view shows the steel and boulder joint. The wall face is constructed with sheets of 3/16 Cor Ten steel plate, trimmed with a 3 x 2 angle iron cap situated such that there is a 2" reveal on the front and 3" on top. The wall seams are finished with an additional piece of flat bar and secured with bolts.

I want to close with a note of thanks to the landscape professionals who helped bring my concept to life. Once again, I had the pleasure of working with Pete Wilson of Pete Wilson Stoneworks on this project. Pete and his crew are skilled professionals that have been behind the construction of many of my most memorable projects. In particular, Niall Hannan of Pete Wilson Stoneworks was an instrumental partner in the implementation of the woven steel and boulders in the parking strip. Rob Trautmann is another frequent contributor on client projects and was a natural fit to work with Pete on the installation of the steel wall. This project was a first for all of us in terms of bringing the steel and stone together in this way and shows the true power of a collaborative construction process.

HPSO Get Growing! Workshop with Darcy Daniels: A Exploration of Planting and Garden Design FUN-damentals 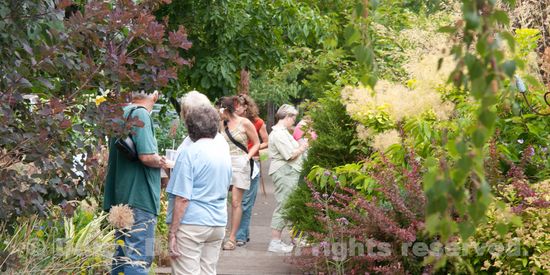 Back after a hiatus, the popular Get Growing! series that I teach in collaboration with the Hardy Plant Society of Oregon (HPSO) is back in a fresh new format: a three-day intensive workshop spanning Friday evening, September 30th through the afternoon of Sunday, October 2nd. The series includes a combination of lectures, slide shows, exercises and field trips designed to energize your garden planning and plant selection process.  The program is geared for the beginner, but is suitable for gardeners of all experience levels. Regardless of your current experience, my goal will be to challenge you to think in new ways about your garden and how you select the plants for it.
The weekend will begin with an evening gathering in my garden in NE Portland with light refreshments, followed by slides and an informal lecture. The Saturday and Sunday sessions, also based out of my garden studio, will be a combination of lectures, exercises and field trips designed to inspire and inform, helping you be more successful in your garden-making. This multi-day approach allows for a broader range and more in-depth exploration of the topics.

We’ll cover basic garden design principles -- providing an introduction to the garden planning process, as well as lots of food for thought and some great tools for helping you to create plant combinations with strong visual interest and seasonal flow in your garden.

Classes are held at my home garden & studio in NE Portland. There will be field trip(s) on Sunday, and possibly Saturday. Carpools for the field trips will be arranged Friday night.

Here's what students from previous classes are saying about the series:

"...[H]elped some things 'gel' for me in a way they hadn't before ... have a firmer grip on design principles and starting points for thinking about the garden ..."

"I would have expected it to cost more"

"Great for home gardeners, not overwhelming"

" Darcy is great; able to teach beginners and more experienced folks at once. Practical but very creative, approachable" 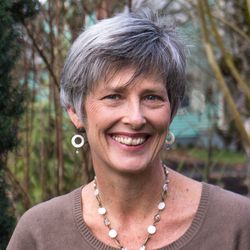